Native American jewelry connects people to a rich artistic tradition among many cultures. It’s defined as an expression of culture, no matter the style, making it much more than a piece of silver with a costly price tag slapped on it. 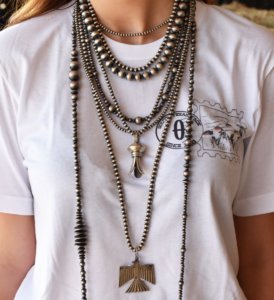 Beginning in the early 19th century, silversmithing was brought to the southwest by the Spanish. This dexterity slowly spread throughout families and was soon passed down from generation to generation—a way that artists keep this enduring tradition alive today. Native American tribes used silversmithing as an outlet for trading purposes. Tribes would trade their jewelry for livestock and other commodities. Jewelry making soon became an indispensable element of the tribes’ economic survival.

After the birth of Navajo silversmithing, many tribes took the techniques learned and made them their own. Within their jewelry, each tribe tells a unique story with distinctive styles. The most prominent Southwestern tribes are the Navajo, Zuni, Hopi, and Santo Domingo.

The most widespread and well-known jewelry belongs to the tribe of the first Native American silversmiths—the Navajo tribe. An important figure in Navajo jewelry making was Atsidi Sani who was the first Native American silversmith to incorporate silver into his jewelry. Another prominent figure from the Navajo tribe was Atsidi Chon who later combined turquoise with silver. Before tourists took interest, the Navajo turquoise jewelry was only used for religious beliefs and ceremonies. Artists used larger pieces of turquoise, coral and other stones surrounded by designs of flowers, leaves, beads, and hand stamp work made of sterling silver. Other types of jewelry made by the Navajo include naja pendants, sandcast, and the most definitive piece—squash blossom necklaces.

Early Zuni pieces were plain, hand-wrought silver designed with simple engraving. Once they began to include turquoise in their work, the emphasis on small stone work and inlay techniques emerged. Today, the Zuni tribe is best known for their intricate stone work with animal-themed fetishes. Like most Native American tribes, the Zuni people had a strong connection with the Earth and often incorporated plants and animals into spiritual beliefs and rituals. It is believed that an animal spirit resides in each fetish therefore they were carved into shapes of common animals. These objects hold a symbolic meaning and are used to attract luck, protection, and power. Many are used for decoration but are also incorporated into different types of jewelry.

Zuni silver work is distinguished by its smaller inset stones of black, coral, shell and turquoise that are meticulously cut to overshadow the silver work underneath.

Having had limited silver quantities, the Hopi crafted their jewelry from natural materials, shell, turquoise, and other stones. The most recognized type of silver work by the Hopi is known as overlay. In this technique, two layers of sterling silver are soldered together with traditional designs carved into the top silver layer. The bottom layer is oxidized to a darker color while the top layer is soldered on, allowing the design show through. This creates a highly unique and desirable aesthetic while also ensuring durability of the piece. Majority of the jewelry is silver; however, turquoise holds a special significance in Hopi culture. Known as the “stone of life,” turquoise represents good fortune and wealth and is often used in rituals and ceremonies.

In the Santo Domingo tribe, “heishi” beads are their most famous contribution to the jewelry world. In the language of the Santo Domingo Indians, “heishi” means “shell bead.” These small tube or disc-shaped beads are crafted from shell, turquoise, and other polished stones. Santo Domingo artists would spend hours and hours grinding, drilling, and stringing these beads all by hand. Although many heishi beads are constructed by machine today, there are still artists who produce various types of jewelry entirely by hand. The Santo Domingo people are also known for their signature thunderbird necklaces and mosaic inlay on shell or bone.

The famed Fred Harvey era took off near the end of the 19th century when Native American jewelry became one of the more popular commodities that tourists purchased and brought back home as a token of their travels. Fred Harvey constructed eating houses, or “Harvey Houses,” along the Santa Fe railroad lines for tourists to stop for rest and food. Once cultural tourism gained traction in the region, the “Harvey House” chain begin to spread westward into Navajo territory. The Fred Harvey Company had to adjust to the new tourist demographic and come up with new inventive services, thus resulting in the marketing of silver and turquoise jewelry through trading posts to the Navajo tribes. This satisfied the demand of the railroad tourist trade and “Fred Harvey jewelry” gained its name. This lightweight tourist jewelry was sold in Harvey Houses and depot hotels, even alongside the train tracks. Each item was heavily laden with symbols made up by the marketers of the Fred Harvey Company, not the Native Americans. Herman Schweizer, manager and Native American art collector for Fred Harvey Co., attributed to say the popular thunderbird symbol was the “sacred bearer of happiness unlimited.” Schweizer traveled throughout Indian Country to acquire the best Native American jewelry and art which helped him gain relationships with many different tribes, making him a prestigious asset to the Fred Harvey Company.

Native American cultures are very much alive, changing, and growing. Artists are holding on to heritage as well as discovering new concepts.

Artists pour years of experience into each piece they construct. These pieces help tell stories of the past and keep its tradition alive. Native American jewelry is a treasure that shouldn’t be buried but exist for people to learn and appreciate. 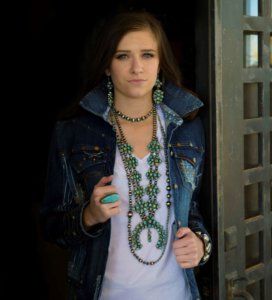