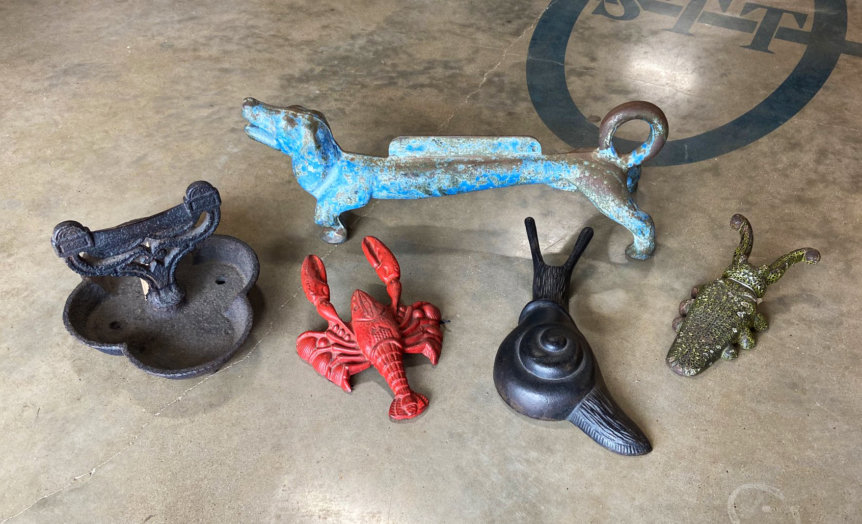 Boot jacks are still a staple for anyone that wears cowboy boots. I myself have one in the house and one that stays in my suitcase, if I had a horse trailer, there would be one in there too. Boot scrapers however are kind of thing of the past, which I have theories on why they are not as popular as they used to be, but we will save that for another day.

In the picture above you will see the blue dog boot scraper, how cool is he. I remember at my great grandparent’s house they had a boot scraper built into the concrete steps at the bottom of the porch. This is way cooler than that! We have several other cast iron and metal boot scrapers from the early 1900’s as well. We just love the amount of detail in each one of them and how they are all so different. 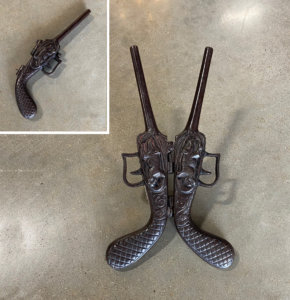 The pistol boot jack, hands down, is one of the coolest ones we have found. Open it is a boot jack and when you close it, it’s a pistol. With the most intricate wild hog cast into it. Seriously this was true craftsmanship. 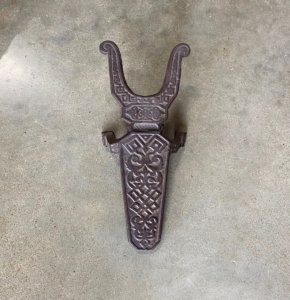 The next one is a boot jack from the Victorian period. To me it is cool to think about how many people have used it, how many collections it has been in, and it is still in fantastic shape.

The animal boot jacks are so much fun though. The lobster, snail, and beetle are just too cute! They all have the original paint on them. I love how there are just certain things, people take care of. Not thinking that one day a family member or friend will want it to remind them of you. Unfortunately, not everyone is that sentimental, which is good for those of us that like to keep awesome things from the past relevant.

Something we have worked very hard at putting together is our vintage boot jack and scraper collection. We would love to help add to yours. What other things are you collecting that someone who doesn’t live the lifestyle looks at you like you are crazy for keeping?