Let it Snow! Lone Star Christmas at Gaylord Texas Resort and Convention Center. This year the Gaylord Texan is presenting ICE featuring Rudolph. Two million pounds of hand carved ice sculptures in two story ice slides and the island of misfit toys. Don’t forget to visit Santa’s workshop and hear about how Rudolph saves Christmas at the Gaylord Texan. On the way out make reservations to eat the Rudolph buffet and take family pictures with Rudolph himself. One of the most memorable Christmas adventures in Texas for the family and friends. Visit the their website to purchase the Christmas ICE package for you and your family. 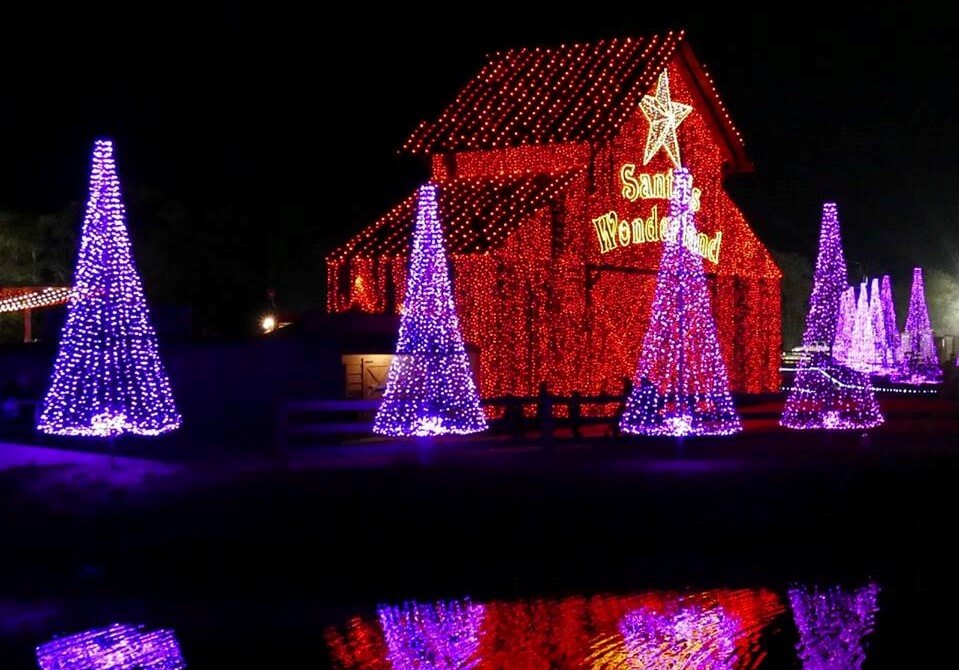 Santa’s Wonderland is a Texas Christmas Experience Like No Other

Located in College Station, TX, Santa’s Wonderland is open from November 9th, 2018 thru December 30th, 2018. This seasonal amusement park recreates a Texas Christmas village that features various events for everyone. Enjoy hayride tours, carriage rides, Frostbite’s Mountain, a Texas sized snow globe, a petting zoo, getting to visit Santa, and so much more!

If you feel like taking it easy, you can relax by cozy campfires and listen to live music while the nightly Texas snow falls. There’s also a 25,000sq ft. covered area filled with shops for those last-minute Christmas shoppers. Don’t forget to grab a bite to eat at Frostbite’s Food Village for fajita burritos, Texas BBQ, homemade pizza, smores, and much more.

Santa’s Wonderland is a place for the whole family to enjoy. Come one weekend or come every night! 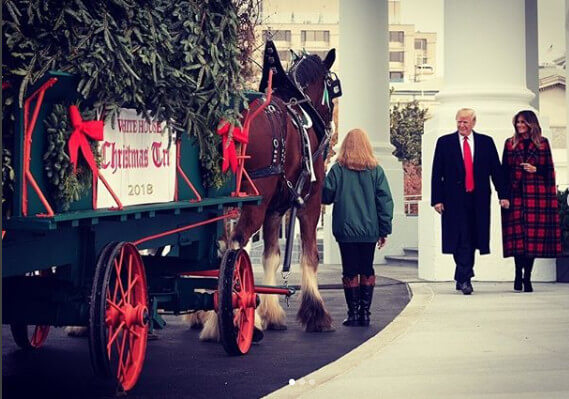 President Donald J. Trump and First Lady Melania Trump, joined by members of the first family, began the holiday season by lighting the National Christmas Tree at the 2018 ceremony. Performers at this year’s ceremony included LOCASH, Spensha Baker, the Dominican Sisters of Mary and many more.

On Christmas Eve of 1923, President Calvin Coolidge began the tradition of lighting a Christmas tree as a local choir and quartet from the United States Marine band performed.

Over the years, many presidents have utilized this ceremony to share a Christmas message to the country to invoke hope after war, joy in the season, and patriotism among all.

Follow the link below to learn more about the history of the National Christmas Tree Lighting including who gave permission to have a Christmas tree at the White House in the first place, why Santa himself personally changed any broken light bulbs on the tree, and how a 15 year old Colorado Blue Spruce Tree in Pennsylvania (that was originally a Mother’s Day gift) was selected as the National Christmas Tree therefore had to be unearthed and transported to Washington, D. C.! 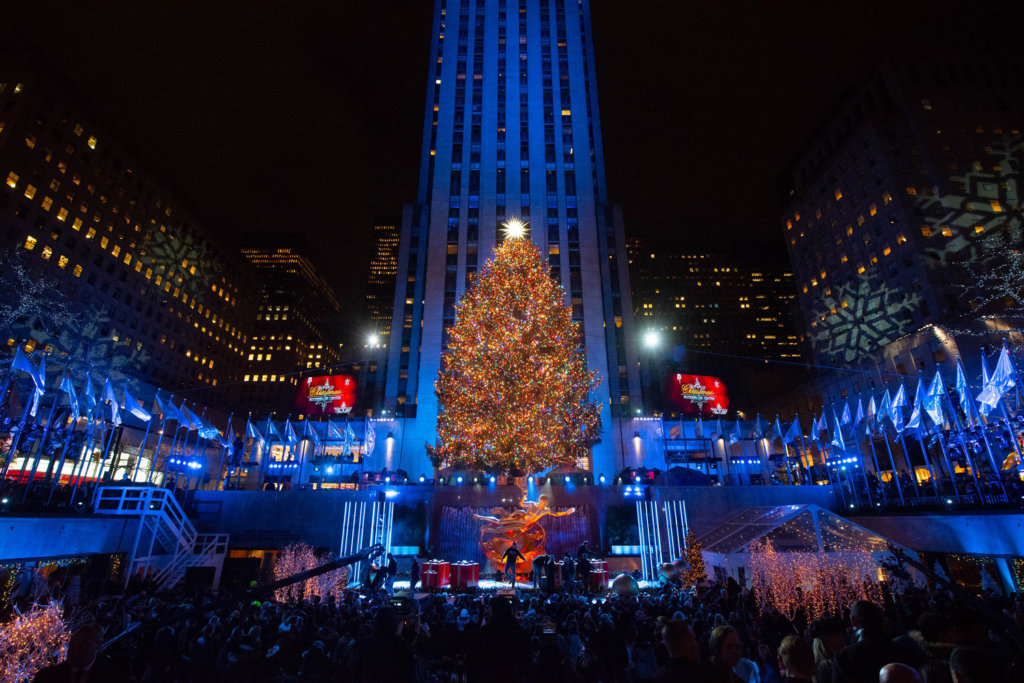 Light up the City

The Rockefeller Center Christmas Tree is a huge holiday staple for New York City. Christmas begins in the city when the tree is lit for the first time at Rockefeller Plaza, usually on the Wednesday following Thanksgiving and stays lit until January 7th at 9:00 pm.

This year the tree was lit on November 28th at the Plaza as thousands of people gathered to see, as they do every year, crowding around for the Tree Lighting Ceremony. While millions of others watched the live broadcast from home, from 8:00 pm – 11:00 pm. Along with the ceremony the evening also included live music performances. This year was a line up of: Tony Bennett and Diana Krall, Brett Eldredge, Darci Lynne Farmer ,John Legend, Martina McBride, Pentatonix,and Kellie Pickler.

The 72-foot tall Norway Spruce tree is covered in over 50,0oo lights and topped with a 9 foot Swarovski crystal star lit with LED lights. 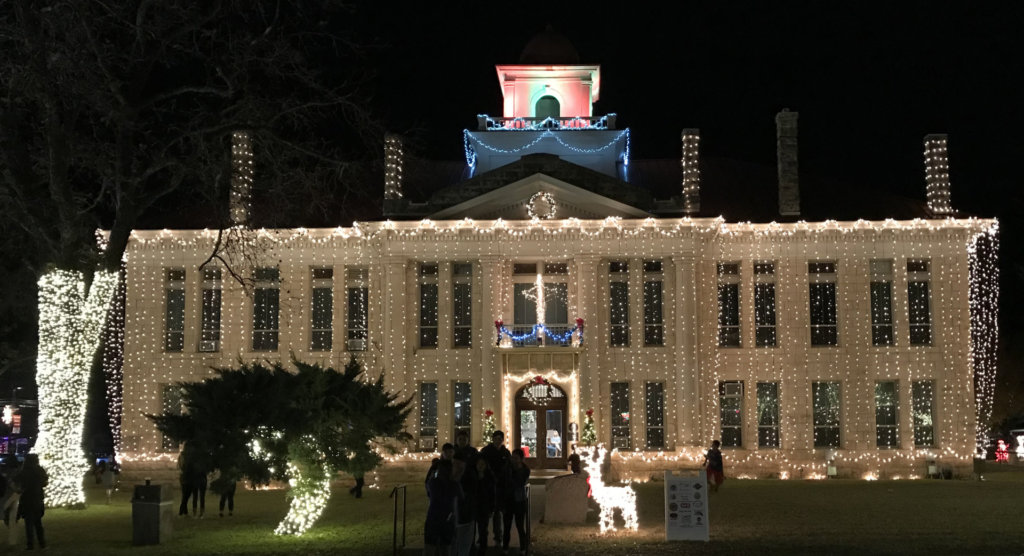 Just two and a half hours from South Texas Tack, you will find Johnson City, Texas. For the past 29 years the town lights up for the annual Lights Spectacular; visit this year from November 23, 2018 through January 6, 2019.

Explore the illuminated downtown on tractor-pulled hayrides, in a horse driven carriage, or do what we did and check it out on foot. The Courthouse, City Park, Pedernales Electric Co-op Headquarters along with many other local businesses across three city blocks light up the town with over one million lights. The park is lit up with lights and different scenes–from Disney characters to Gingerbread Men with lots of fun photo ops for you and the family. The kids can also take pictures with Santa Claus!

If you get hungry, don’t worry! There are several food options available. We stopped at Bryan’s on 290, and they were nice enough to seat us even though it was right at closing time. The food and wine were delicious! We were lucky enough to meet the owner’s mom, who generously shared her homemade she-said-it-so-fast-I-didn’t-quite-catch-the-name-of-it dessert, (but it was similar to apple streusel!)

As you are arriving in Johnson City to see the Lights Spectacular, keep your eyes open for the Lighthouse Hill Ranch. The lighthouse is decked out in shiny lights for Christmas, and it is beautiful–you can’t miss it if you are driving down 281!